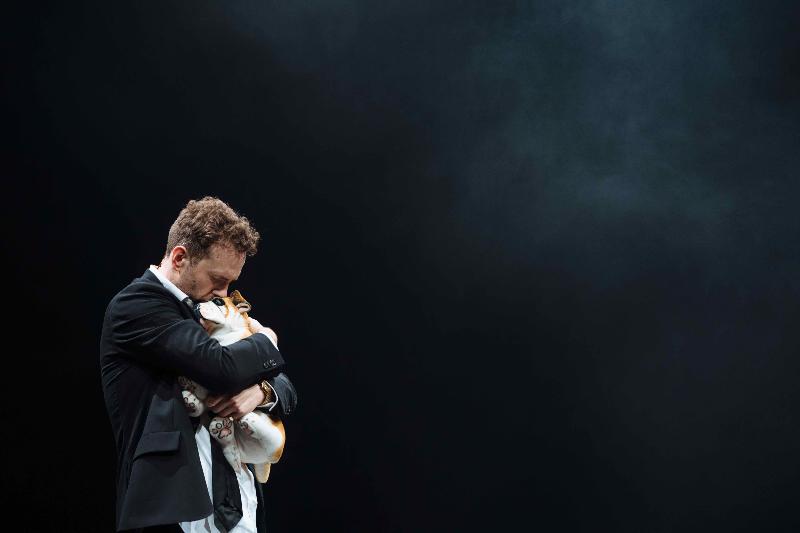 Ayrton Diablo spotlights The Death of England at the National Theatre

The National Theatre’s production of Clint Dyer and Roy Williams’ The Death of England was performed at the Dorfman Theatre in Spring 2020 before the venue closed due to the COVID-19 pandemic.

The one-man show was an intense study of grief and identity in Britain, performed in-the-round on a cross-shaped stage by Rafe Spall in an explosively energetic performance. Dyer’s direction, and Sadeysa Greenaway-Bailey and ULTZ’s stark set demanded equally dramatic lighting from the outset, which was provided by dance and theatre lighting designer, and NT regular, Jackie Shemesh.

Shemesh chose 4 Ayrton Diablo 300W LED profile fixtures as central features of his design, which he mainly deployed as followspots to track Spall’s every move.

The Diablo fixtures were rigged above the four inner corners of the cross stage, side-mounted and dropped 1m lower than the rest of the rig to allow clear sightlines to every angle of the stage. “I felt very strongly that the Diablos should be lower than the height of the Dorfman as I wanted them to be visible to the audience as part of the overall design concept,” says Shemesh. “Diablo’s small form factor proved a definite advantage: they just looked right and their compact size did not obscure the audience sightlines.”

The Dorfman Theatre is the smallest of the National Theatre’s three spaces with a 450-seat capacity, and a balcony on a level with the lighting rig. “The Diablos were rigged only 2m – 2.5m from audience yet we had no complaints about noise,” says Shemesh. “That was a relief and such a benefit!”

Ayrton Diablo spotlights The Death of England at the National Theatre