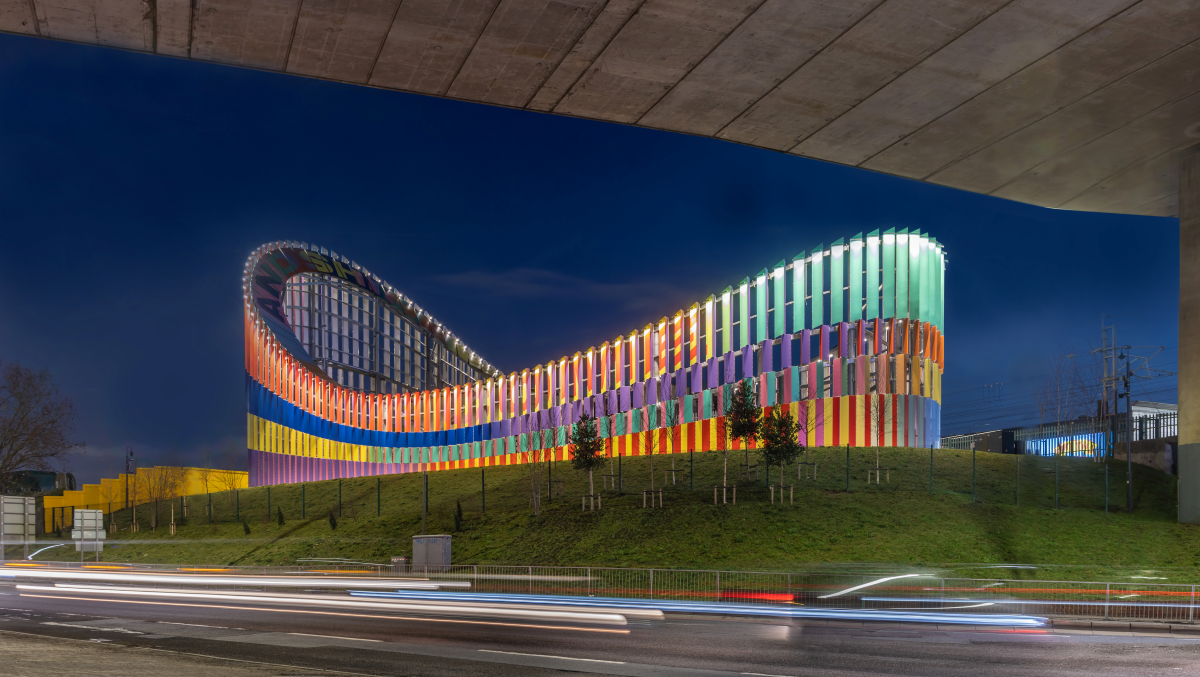 Brent Cross Town, one of the largest urban regeneration projects in Europe, today unveils a new 21-metre-high and 52-metre-long permanent public artwork. The artwork has been created by celebrated London-based artist Lakwena and architects IF_DO, and is formed of a ‘wrap’ around the new electrical substation for Brent Cross Town.

The exuberant colour scheme and vast scale of the artwork, which at its highest point is taller than the Angel of the North (at 20 metres), ensures that it will become a new local landmark. The artwork, titled “Here we come, here we rise”, sits next to London’s A406 North Circular at the junction with the M1 motorway, and adjacent to both the Thameslink railway line that connects central London with the home counties north of the city, and the new Brent Cross West station, which is due to open this year. It is estimated that some six million people each year will see it from the road and rail alone. 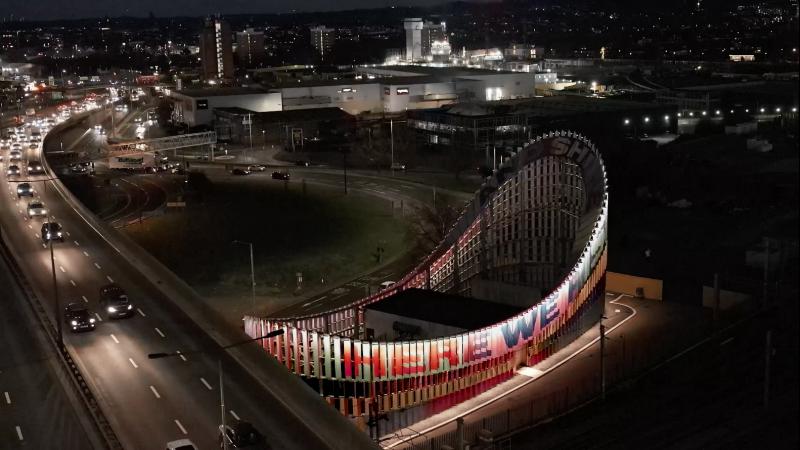 Lakwena, who is known for her joyful technicolour murals and graphical text poetry, has applied her signature colour, pattern and language to the design. The inspirational statement “Here we come, Here we rise and shine” reflects the ambition to inspire and bring people together in the local community.

Working with Lakwena, IF_DO created a unique structure and façade design comprised of four undulating bands and triangular-shaped “lenticular” panels that create a kaleidoscopic visual effect to emphasise the idea of movement as viewers move around the structure. Lakwena and IF_DO drew on influences as varied as Eadweard Muybridge’s motion studies and historic forms of roadside structures, such as billboards, funfairs and industrial sites that make use of a skeletal frame supporting a brightly coloured skin.

Brent Cross Town, which is being delivered in partnership by Related Argent and Barnet Council, is being designed to be a net zero carbon development by 2030, and investment in efficient new infrastructure is a key part of this. The substation will supply electricity to all of Brent Cross Town, including the 6,700 new homes, 3 million sq ft of offices and new retail and leisure spaces, as well as to the low-carbon district heating/cooling networks operated by Swedish energy company Vattenfall. Brent Cross Town will source all electricity supplies within its control from 100% renewables sources.

In addition to being a colourful and dynamic beacon for north London, the electrical substation is also notable for its sustainable innovations.  Global engineers, Arup, led the design team with a focus on minimising the environmental impact of the structure. The project puts circular economy principles into action with circa 50% of the structural steel being salvaged from unused oil pipelines, reducing embodied carbon emissions by over 40%. The concrete used is a combination of low cement concrete and the new ‘Earth Friendly Concrete’ – a cement-free concrete. Using these alternative concrete mixes saves up to 33% and 70% of embodied carbon respectively compared to standard mixes.

Galldris were the main contractor responsible for the delivery of the overall project, undertaking the civil engineering, working with Bourne Group, the specialist technology-led construction engineering company, to deliver the wrap. Bourne Group also worked closely with Arup to progress the design philosophy into a solution that could be efficiently fabricated and constructed, and undertook the project’s steelwork construction. TPS Project Management, acting as project manager, supported on delivery overseeing design management and construction of the wrap, substation and off-site reinforcement.

Lighting plays a key part in the design of the artwork and specialists Michael Grubb Studio designed the lighting scheme to be discreet and attract attention to the artwork during the day and at night. The lighting creates a halo around the façade’s wrap which filters down through the structure, allowing the light to fade away at lower level.

The project has also brought back to life a piece of brownfield, ex-industrial land with the creation of a newly landscaped embankment designed by Gillespies Landscape Architects. Newly planted trees and wildflower meadow provides a naturalistic setting to the artwork, as well as increasing site biodiversity, enhancing local wildlife corridors and tying in with the wider network of green infrastructure within the masterplan and surrounding area.

The launch of the new public artwork adds to the growing momentum behind Brent Cross Town with affordable, student and homes to buy all under construction, and the recent announcement that Sheffield Hallam will open its first campus outside of Sheffield at the new town.

Nick Searl, Partner at Related Argent, commented: “This amazing piece of public art, designed in collaboration between artist Lakwena and architect IF_DO, is set to become a great landmark for London in this highly visible location. It sets the tone for the wider Brent Cross Town neighbourhood and demonstrates our commitment to art, culture and low carbon development. It would have been easy to take the more traditional route of enclosing the substation in a nondescript box and to miss the opportunity that is now so evident. Instead, we have demonstrated that even the most functional pieces of infrastructure can play an important role in defining place and lifting the spirits.”

Councillor Barry Rawlings, Leader of Barnet Council, said: “We are investing in public art across Barnet because we recognise the potential to improve the wellbeing of our people and its positive role in building a sense of place. Not only will this iconic large-scale artwork put Brent Cross Town on the map, but it also showcases a talented London artist, and wraps an important piece of sustainable infrastructure that is key to meeting Brent Cross Town’s aspirations to achieve net zero Carbon by 2030 – this really is green innovation and creativity at its best.”

Mayor of London, Sadiq Khan said: “Lakwena has created an incredible artwork that brings together creativity and sustainability and will be enjoyed by millions of people. London is a world class cultural capital and this major addition to our public realm in the heart of Brent Cross is another example of how we’re working together to build a better London for everyone.”

Lakwena, the artist, said:“The key pledges of the Brent Cross Town development highlight a commitment to play, inclusivity, sustainability and connectivity. All of these themes are expressed through a messaging approach which alludes to movement, togetherness, ambition and a sense of newness.”

Sarah Castle, Director at IF_DO, said: “It is rare to have the opportunity to work on a project of the scale and ambition of this, and to be able to realise it with such conceptual purity. Combining architecture, infrastructure and art, it has been a wonderfully collaborative process from the start, with IF_DO manipulating form and shape, and Lakwena exploring colour and poetry. The structure is inspired by movement: it is designed to be viewed both in motion by the millions that pass the site by train and by road, and to convey a sense of motion as it is viewed from across the neighbourhood. The architectural wrap transforms utilitarian infrastructure into a major new landmark for Brent Cross that celebrates the spirit of the local community.”

Ben Glover, Associate Director, Waste and Energy Buildings Business Leader at Arup, added: “Brent Cross Town’s substation presented a unique opportunity to be part of a project which equally prioritises environmental, social and economic factors – driving sustainable development. By choosing materials based on their carbon impact, reusing materials and reducing waste, we’re proud to have met this challenge with circular economy principles and deliver a net-zero substation for the development.”