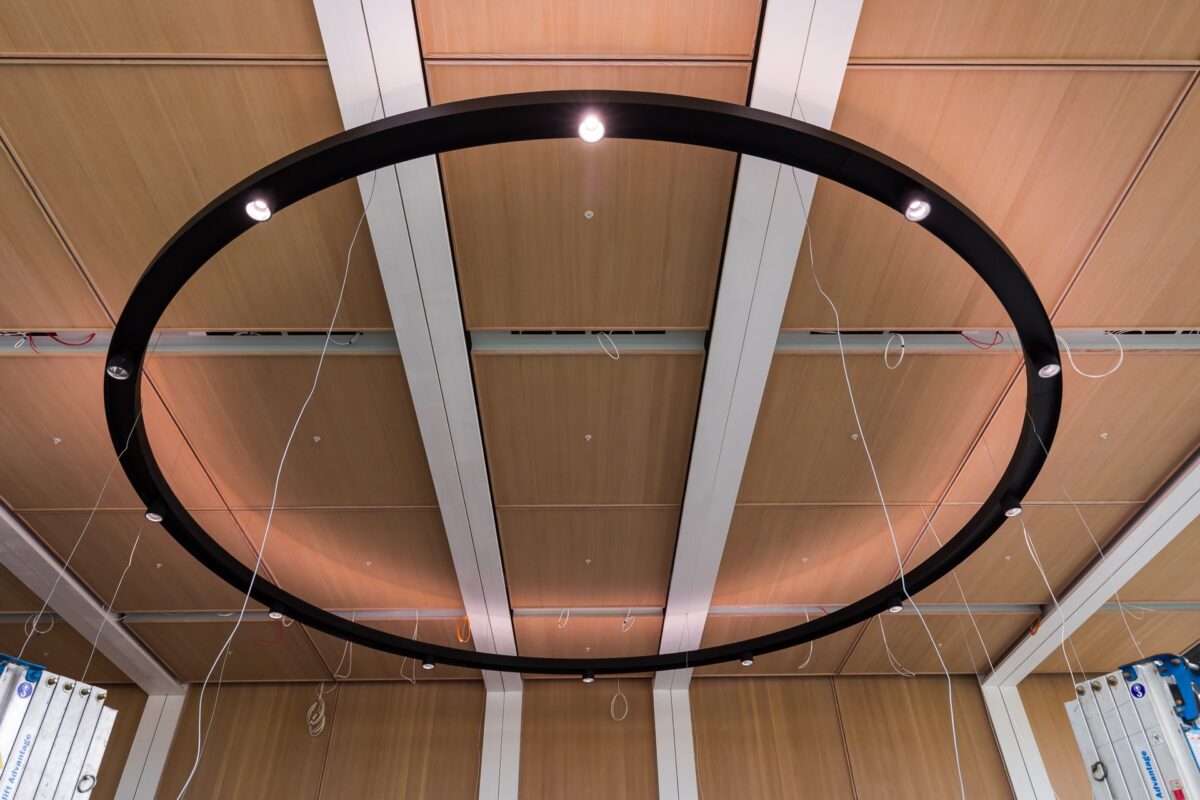 New Council chamber in the spotlight

A GIANT feature light that will illuminate one of City Hall’s most prominent rooms has been hung today, as the Sunderland community hub draws closer to completion.

The new digitally enabled chamber, pitted at the heart of City Hall, features a 9.3m circular diameter light fitting, creating a super-modern space that has been designed to enhance open democracy as well as providing a focal point in a room that will be used by the community for weddings as well as conferences and events. 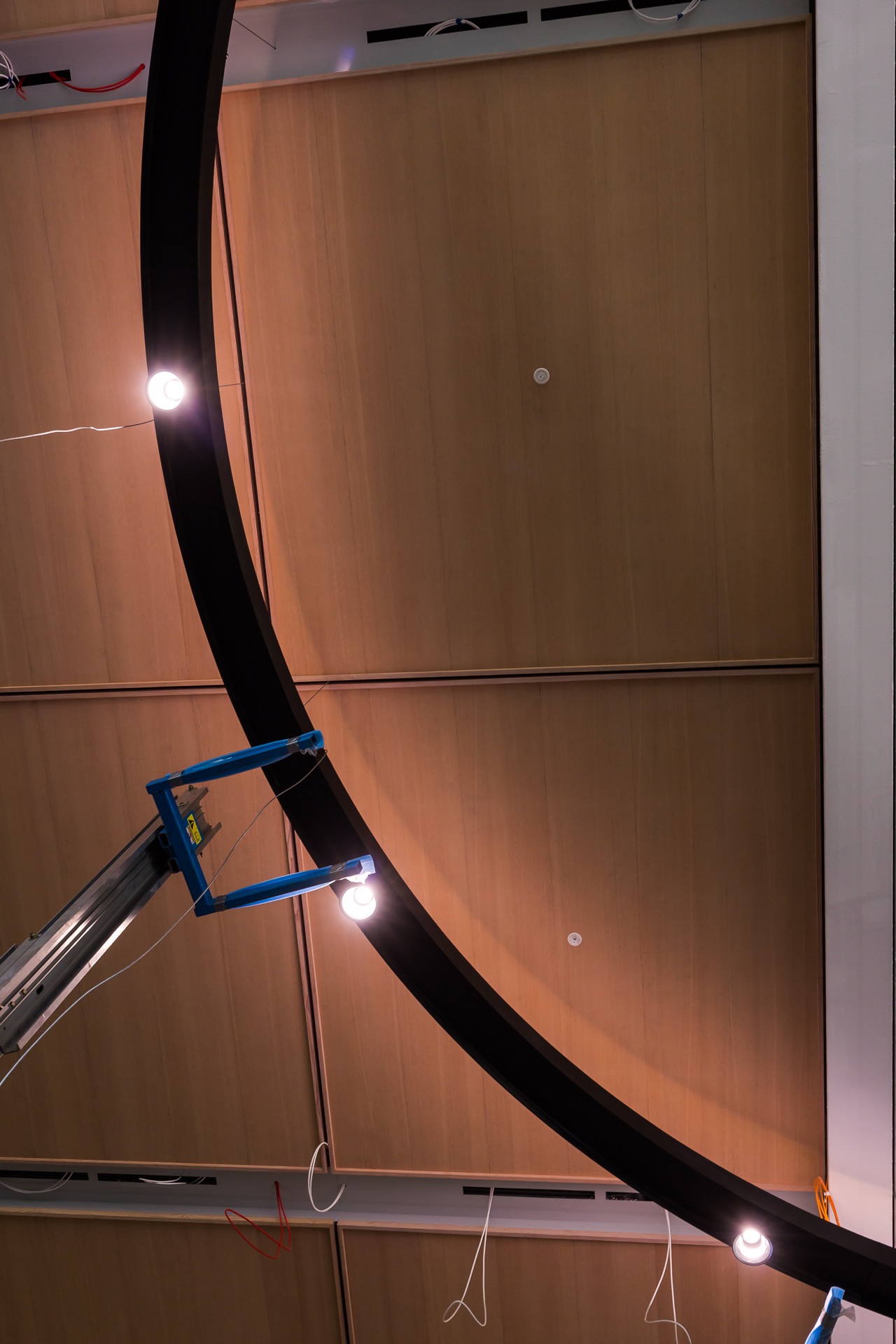 The pendulum light installation is the latest step in the development of of City Hall, which will become home to Sunderland City Council as well as a range of other public sector organisations, delivering a ‘one stop shop’ for residents to access a range of support.

City Hall’s chamber – which integrates digital technology to enable open democracy through the streaming of council meetings – is a key focal point of the 190,000sq ft building and will make it easier than ever to join meetings remotely, in-line with the city’s ambitions to become carbon neutral by 2040. 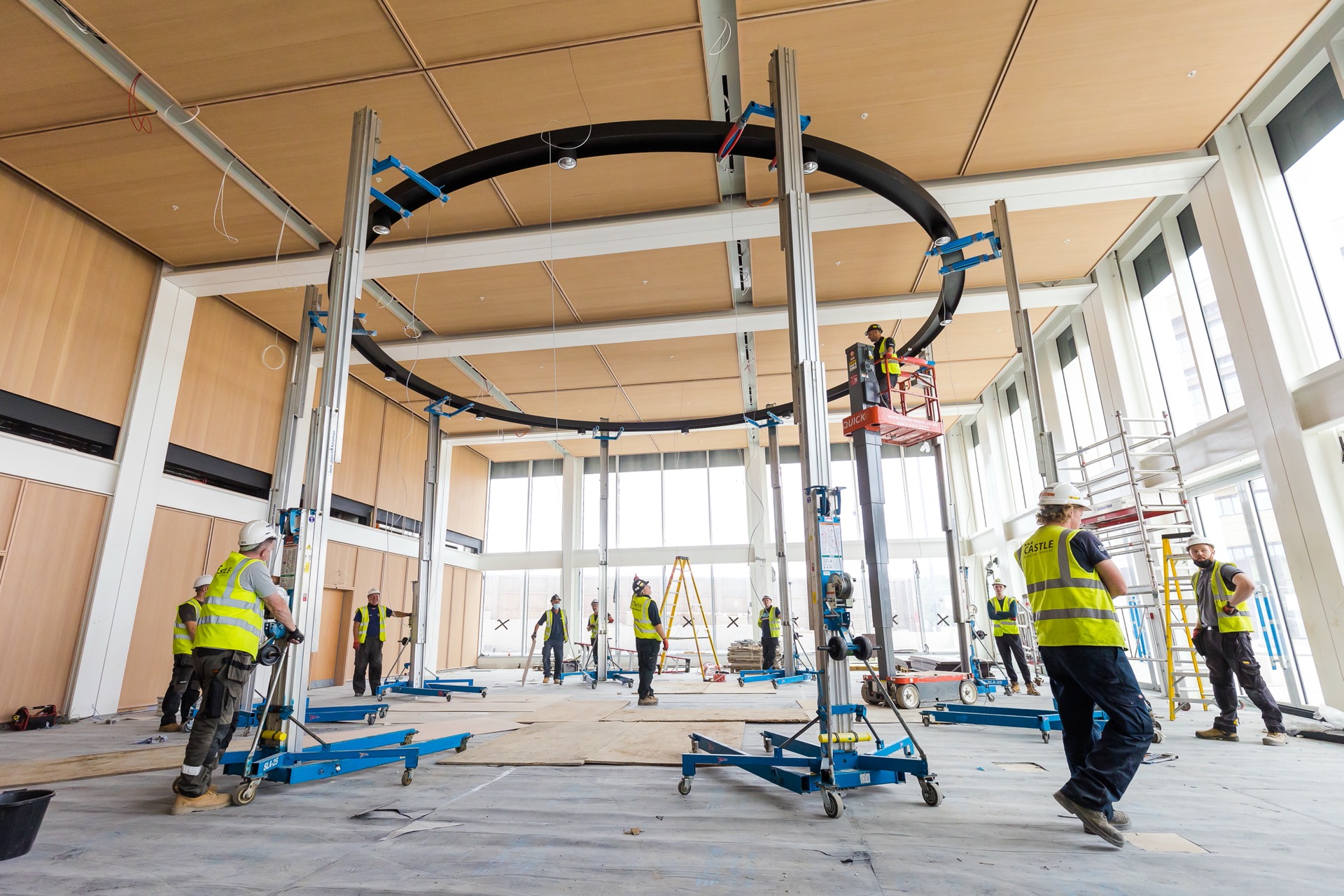 Unlike the chamber at the former Civic Centre site on Burdon Road, the new venue will have no fixed floor furniture meaning it can flex to a range of uses, as well as being accessible from the outside through bi-folding doors.  It is expected that the stunning space will be well-used by the community when City Hall opens its doors in November.

Cllr Graeme Miller, leader of Sunderland City Council, said: “When we first outlined our initial vision for City Hall, one of our main priorities was to develop a civic building fit for a 21st century city, a space that not only streamlined our core services and delivered a better experience for residents in the city, but also helped modernise the way we work.

“A key part of this was making sure the building was 5G-ready and ensuring it fostered an environment that would encourage hybrid and remote working, and the chamber is a perfect example of how we’re doing just that and delivering on our promises.

“Throughout the pandemic, millions of people and organisations across the globe have had their eyes opened to not only the environmental and economic benefits of hybrid and remote working, but also the many work-life benefits it brings, and the ability to live stream and broadcast from the new chamber will help improve the work-life balance of everyone utilising the chamber, be it for council meetings, training or conferences.”

He added: “Our residents deserve a City Hall and city centre that reflects the ambition of Sunderland.  And we’re hugely ambitious.  We’re investing heavily in the heart of Sunderland as a council, and private sector investment is flooding in too.  We’re reinventing Sunderland and creating new places and buildings our residents can be proud of.  City Hall is one such space.

“By opening up the chamber to the wider public and a regional audience, we are creating a space where everyone benefits while ensuring that City Hall is a real catalyst for change in Sunderland.  We’re delighted to see it continuing to move forward at pace.”

The building is being constructed by Sunderland firm Bowmer + Kirkland, ploughing millions of pounds into the local economy.  The start of work on City Hall followed the completion of The Beam, the first building on Riverside Sunderland, and the new civic building was part of a £100m investment by Legal & General, which will also see two new commercial buildings developed on the site.  The building is one of a number of large-scale development projects progressing in the city centre, part of an ambitious vision to double the residential population in the city centre and increase employment by 50 per cent.