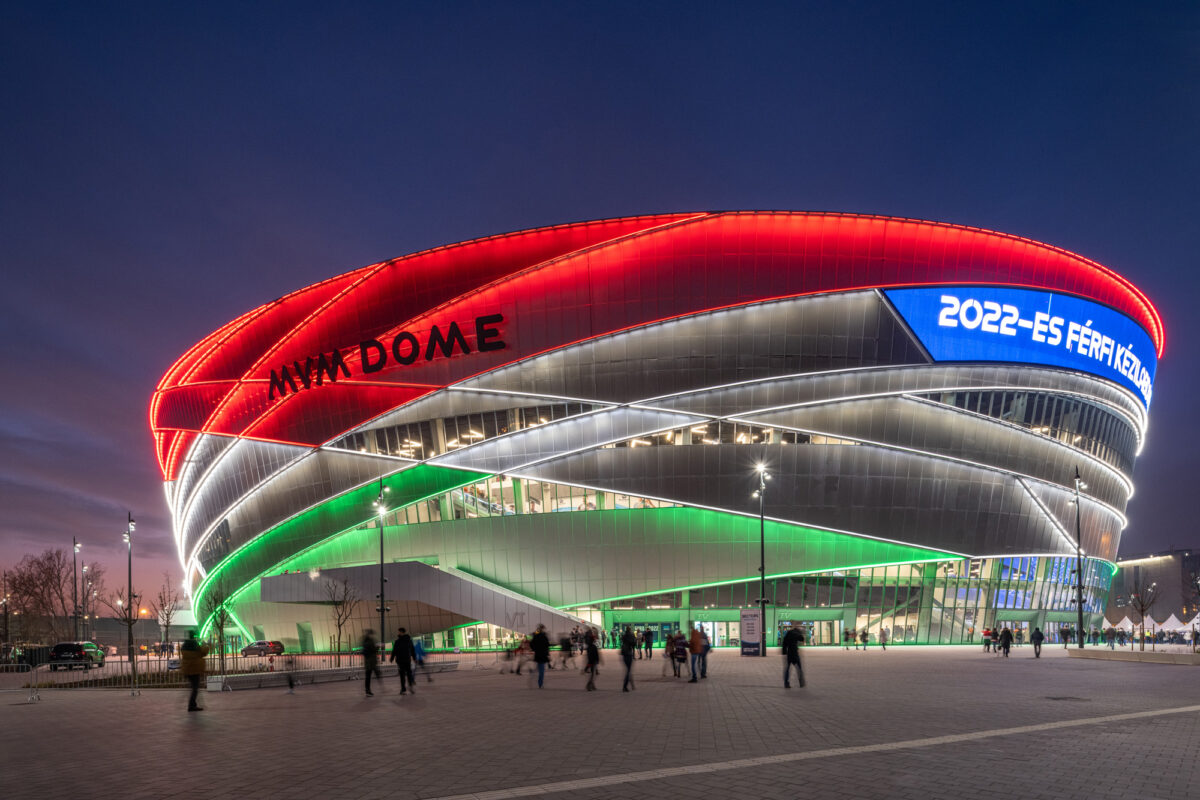 Pharos in control at the MVM Dome

In the Hungarian capital city of Budapest, the MVM Dome is a 50,000 m2 multifunctional arena with the capacity to accommodate 20,000 people. It is Europe’s largest handball arena, built to coincide with Hungary being named as the host nation for the 2022 European Men’s Handball Championship.

As well as a venue for a wide array of indoor sporting events, the hall can also be configured to host concerts, conferences, exhibitions and trade shows, making it an important part of Budapest’s entertainment offering.

The building’s façade is inspired by the anatomical drawings of Michelangelo; designed to conjure up images of skeletal muscles. This striking look is enhanced at night with the clever use of dynamically changing, specially created lighting.

The vibrant, flowing lines of light swirl across the entire façade, dividing the surface of the building into a variety of planes, slices and shapes. These geometric fragments then serve as windows in certain positions, while the steel cladding, which is powder-coated in two shades of grey, plays a key role in the optical resolution of the building mass.

The lighting and control system has been designed, supplied and programmed by BE LIGHT! The system is unusual in its approach; with the lighting fixtures hidden in the façade’s mantle to strengthen the architectural character of the arena.

BE LIGHT! were brought into the project by architects Közti Zrt, along with interior design house MCXVI Építészműterem Kft, and electrical engineers Hungaroproject Mérnökiroda Kft. BE LIGHT! chose solutions from Pharos Architectural Control to deliver dynamic control of the lighting scheme.

BE LIGHT! required a DMX protocol communication system for the RGBW fixtures, assigning 11,328 digital addresses to the façade alone so the luminaires could be controlled individually. They designed a distributed control solution using multiple Pharos Designer LPCs (Lighting Playback Controllers). The compact LPCs are positioned within the façade to provide local DMX to the fixtures, and networked together to still act as one seamless, cohesive control system. A total of twenty-one LPC 1 and fifteen LPC 2 were required for the façade, and a further six networked LPC 1 were distributed inside the Dome to control the lighting in the arena and public areas. The LPC is the perfect choice for this type of installation, providing a flexible and reliable control system and allowing dynamic, precise and fully customisable pre-programmed lighting to be created.

Ádám Kis Head of control system from BE LIGHT! said: “The architecture of the MVM Dome is truly stunning, and we were delighted to be appointed to deliver the lighting scheme to accentuate this. By using innovative control solutions from Pharos, we have given the venue a flexible and dynamic lighting system that can easily be adapted to suit the differing needs of the arena.”

Mark de Gruyter, Regional Sales Manager for EMEA at Pharos Architectural Controls commented: “The MVM Dome is a very impressive venue, attracting global talent across sport, entertainment and music. It is very rewarding to see Pharos solutions playing a key role in the success of their events, ensuring the arena can deliver fantastic results for the thousands of visitors attending each year.”

The adjustable sports lighting is suitable for HDTV broadcasts of high-level world competitions, as well as super slow-motion recordings thanks to the flicker-free technology. The lighting system also plays an integral role in the successful staging of events and concerts, as it controls the auditorium colour temperature as well as delivering dynamic lighting.

When used for a show, dynamic effects such as flashing or running light can be presented based on a pre-written programme. This also means the hall can change its function through the lighting control system, which is something of a unique solution in European venues.

Since its official opening, the MVM Dome has a full line-up planned, featuring sporting events and concerts from music legends such as Tom Jones and Michael Bublé.