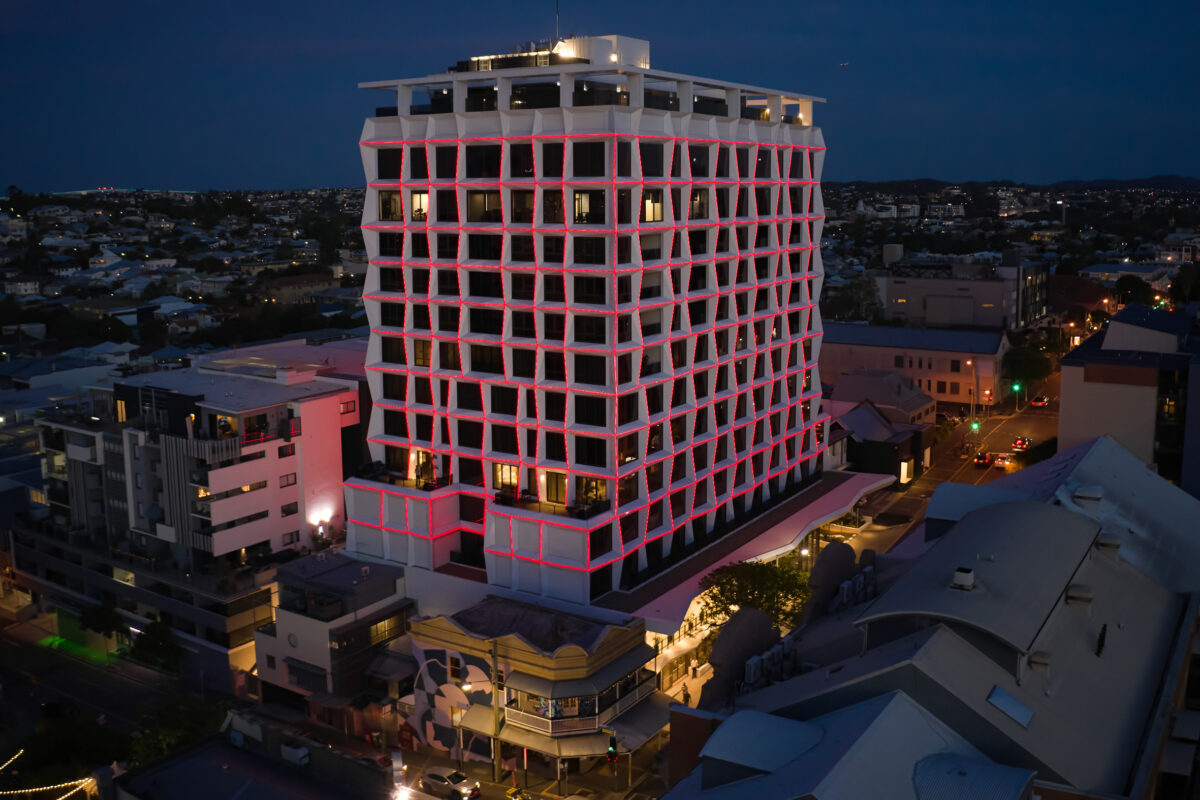 Pharos is a permanent guest at Brisbane’s Hotel X

Striking a pose on the skyline of the hip city of Brisbane, Australia, the new Hotel X is the ultimate in chic destinations. Located in the centre of the city’s Fortitude Valley, also known as the ‘Valley’, this new five-star offering has been designed to reflect its lively and bold neighbourhood.

With its distinctive white geometric façade, Hotel X makes a fantastic first impression before guests even enter the lobby, and its custom façade lighting system has been carefully created to reflect the Valley’s progressive and dynamic atmosphere.

To deliver this large-scale, high-profile façade lighting system, integrated solutions provider bluebottle was appointed to the project. Given its sheer size, LED fixtures were the only choice to fulfil the requirements, with Color Kinetics the chosen brand. The iColor Flex LMX gen2 RGB luminaires were used; mounted in a custom aluminium channel that forms part of the building façade.

The Pharos VLC – Video Lighting Controller – is an extremely capable and cost-effective architectural lighting control solution for large LED pixel arrays such as building façades. For this reason, it was the perfect choice for this large-scale project.

Commenting on their collaboration with Pharos, Claire Enoka, Technical Sales from bluebottle said: “The Pharos VLC 500 Controller handles the pixel mapping of over 40,000 nodes. Used in conjunction with the bluebottle remote management portal, it has allowed for an intuitive, easy-to-use system with full visibility of status, shows and schedules for the facility manager.

“To date some of the more notable shows we’ve been able to achieve have celebrated Easter, The State of Origin Rugby and Brisbane’s successful 2032 Olympic bid.”

Tony Symms, Regional Manager from Pharos added: “The façade of Brisbane’s Hotel X is incredibly striking, making it a fantastic new addition to the city’s skyline. Pharos is delighted to have worked with bluebottle in playing an important role in bringing this to life.”

Hotel X has fast become one of the most-popular destinations in the Valley to meet, drink and dine. With a number of bars, restaurants, a roof top pool and a state-of-the-art gym, it is easy to see why it has made such an impression on locals and travellers. The hotel’s façade, which projects over the Valley, perfectly enhances its appeal.