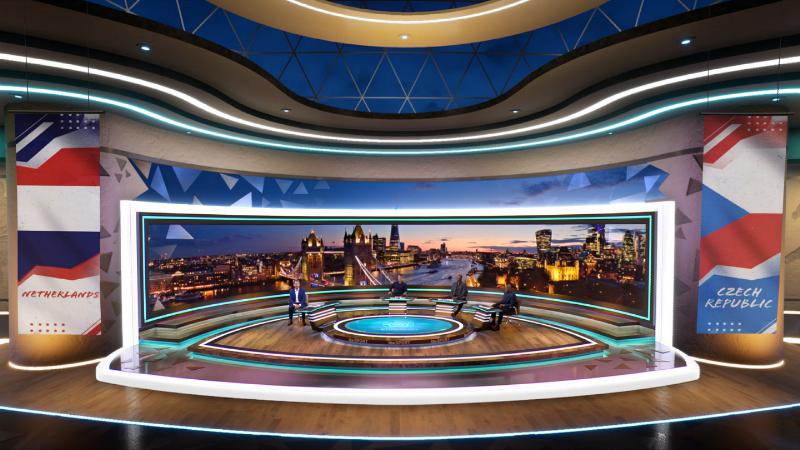 Having previously delivered many creative technical solutions for ITV Sports’ studios during major sporting events, White Light (WL) was engaged for ITV’s coverage of the 2020 UEFA European Football Championship. As a leading specialist in delivering innovative studio technology of this nature, WL developed and delivered a creative technological solution for the studio presentation.

Working under the direction of Paul McNamara, Senior Director and Executive Producer for major events at ITV Sport, WL worked alongside some of the broadcast industry’s most creative minds. Planning for the tournament was complex and challenging, with the team facing a complete overhaul of production plans due to the COVID-19 pandemic forcing a year long delay. ITV had to relocate from the originally planned rooftop studio location in Central London and chose Maidstone Studios as a COVID-secure home for the tournament in 2021.

An innovative hybrid extended reality (XR) studio was designed which, for the first time, placed a real studio set inside a much larger virtual studio. Building on the concept that the same project team initially conceived for ITV Sport’s coverage of the 2018 World Cup in Russia, the boundaries of technology were pushed even further. A 360° expansive virtual environment was created, without any of the challenges of working with green screen.

The set was designed by Paul Sudlow, with the physical elements built by Monkey See Scenery. The design for the extended virtual elements was translated into the Unreal Engine by Kev Cooney and his team at Level. WL led the technical integration across the project and worked closely with the team at Level to optimise and integrate their Unreal Engine design into the system.

Drawing on their extensive experience in live broadcast virtual production and XR, WL worked with ITV Sports Technical Supervisor Paul Bateman and facilities provider Arena to design a robust solution. The system facilitated four studio cameras which could be triggered by the vision mixer as per a standard workflow, but with the actual cameras being cut in the disguise media servers. This allowed WL to ensure that content in the LED video walls, virtual set extensions and AR, cut perfectly in sync to the perspective of each camera when switching between shots. The foreground AR content was provided to WL as a traditional key and fill for each camera by AE Live.

The ground-breaking disguise RenderStream technology allowed WL’s operators on-site in Maidstone to sequence, control and deliver a wide range of content into the hybrid set – treating the real LED wall and virtual world as one unified digital canvas. The team could paint live feeds from the vision mixer and EVS replays into any element of the set. Other dynamic content feeds included 11k video loops of Central London views and live panoramic UHD feeds from the host broadcaster fed directly from the stadiums across Europe.

Andy Hook, WL’s Technical Solutions Director, says “disguise RenderStream gives us an uncompressed, high quality live stream from Unreal Engine into disguise. With seamless integration into the broadcast media system, we can control the physical and virtual environments together in real time, giving us slick, unified control of the whole hybrid studio. We can easily scale render power for these complex virtual or hybrid projects by simply adding more render nodes on a 25gb IP backbone. This removes the performance bottlenecks we used to see on virtual set projects and means creatives are no longer limited by hardware and only their imagination”. WL deployed a fleet of six of the latest rxII render nodes from disguise, along with three of their flagship vx range to produce a powerful, fully redundant and integrated media system to run the whole studio.

WL welcomed DOP’s Chris Hollier and Andy Cottey, along with ITV’s creative department, to their London HQ where they made use of their pre-visualisation suite for testing and programming. This allowed the teams to change the set looks, program lighting and test screen content before they even stepped onsite in Maidstone.

Lighting was crucial to this project and WL provided all the real studio lighting fixtures and oversaw the lighting integration between the real and virtual worlds. Additional platform lighting for some of the outside broadcasts from Wembley and Hampden Park was also provided. The team chose to develop a hybrid scheme for Maidstone Studios, allowing control of all lighting fixtures from a traditional console in both the real set and the virtual environment. Hollier explains “Because there was no green screen keying to consider, we could focus on lighting the physical set without compromise. The huge LED canvas gave us a source of ambient light which affected the pundits and gave us real reflections of the London vista beyond.  This combined with the live, virtual lighting control we had at our disposal further blurred the lines between the real and virtual worlds allowing us to accurately match the changeable London weather conditions at all times of day in both worlds. This was a massive step forward for the team and a workflow I’m excited to explore further.”

The match between England and Denmark drew the largest football audience on a single channel ever with a huge 27.6 million viewers.